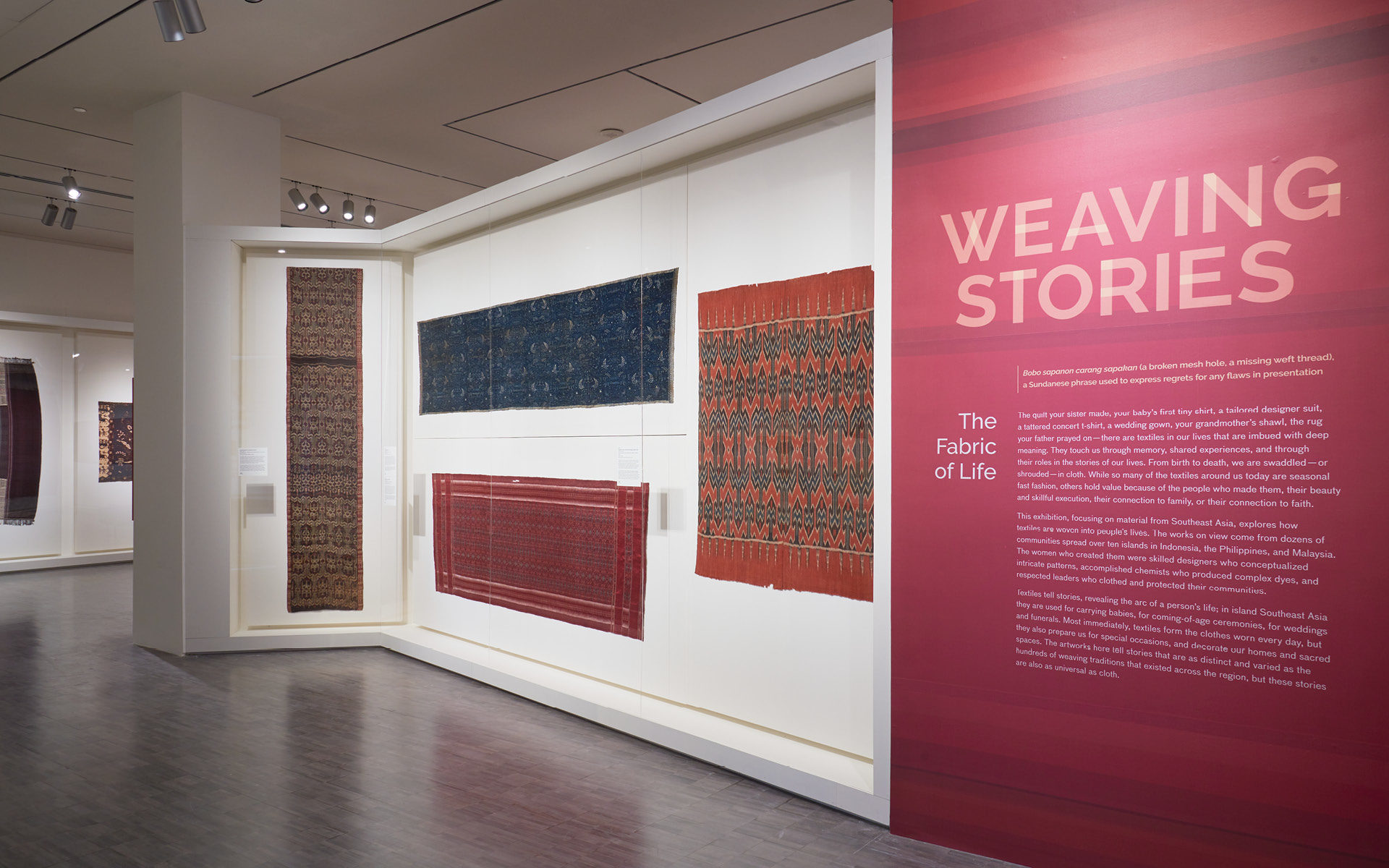 How can research, conservation, and collaboration overcome cultural loss?

Colonialism, changing customs, war, and contemporary collecting practices have all impacted the use and meaning of textiles in Southeast Asia. In this online Re-History Series discussion, a panel of experts explores themes of loss, destruction, and conservation during colonial periods as well as the present day. They will discuss efforts to center the makers’ voices and recover from losses through research, conservation, and collaboration.

In conjunction with the exhibition Weaving Stories, on view through May 2.

Ruth Barnes is the inaugural Thomas Jaffe Curator of Indo-Pacific Art and a member of the Council on Southeast Asia Studies at Yale University. She received her doctorate from Oxford University and was previously textile curator at the Ashmolean Museum, where she organized exhibitions on Asian and Islamic textiles, early Indian Ocean trade, and the theme of pilgrimage. Her publications include “The Ikat Textiles of Lamalera” and “Indian Block-Printed Textiles in Egypt: The Newberry Collection in the Ashmolean Museum, Oxford.” Her most recent book, “Five Centuries of Indonesian Textiles,” co-edited with Mary Kahlenberg, received the R. L. Shep Award in 2010.

Since 2000, Julia Brennan has developed grass-roots cultural heritage preservation projects with communities in Southeast Asia, Bhutan, Madagascar, and Algeria. Her project and publication “Our Ancestors Knew Best” gathers traditional textile preservation methods and materials in Asia to integrate this knowledge into present-day practices. She has trained local stakeholders in Rwanda and Cambodia to establish site-specific protocols for triage and care of victims’ textile remains. Brennan started her career in 1985 at the Textile Museum in Washington D.C. and founded Caring for Textiles in 1996.

Cherubim Quizon studies how ideas of nation, ethnicity, and the self relate to symbols and their transformation, whether approached as material culture, art, or popular imagery. Her principal research is on the textiles and dress of the Bagobo of Mindanao, the Philippines, using multisite fieldwork to understand contemporary indigenous textile practices while critically engaging with American museum collections from the 1900s. She broadly explores the politics of representation whether in living anthropological displays of peoples in World’s Fairs; in tropes of indigenism and dictatorship in 20th-century painting; and in lexical and visual signifiers for indigenous peoples in the 21st century that diverge from indigenous modes of self-ascription.

Natasha Reichle specializes in the art and architecture of Southeast Asia, with a particular focus on Indonesia and island Southeast Asia. She curated the exhibition, Weaving Stories, currently on view, which draws from the museum’s collection of Southeast Asian textiles, and uses archival images, macro-photography, and poetry to illuminate the role of textiles as markers of identity, objects of status, and symbols of faith. Reichle’s other recent exhibitions at the museum include Lost at Sea: Art Recovered from Shipwrecks and Philippine Art: Collecting Art, Collecting Memories.

Sandra Sardjono is the founder and president of the Tracing Patterns Foundation, a nonprofit cultural organization based in Berkeley, California. The organization promotes textile studies and indigenous scholarships through international collaborations. Sardjono is also an independent scholar and curator with a special interest in Indonesian textile history and weaving technology. She earned her doctorate in art history from the University of California, Berkeley.

This program is part of the Asian Art Museum Re-History Series, which critically examines the history of the museum and its collections with consideration of race, colonialism, and power.

We use cookies to ensure that we give you the best experience on our website. If you continue to use this site we will assume that you are happy with it.Ok